For many years collectors have known about Matt’s first professional recording, but few details were known about it. Whilst researching the session listing for Special Reserve The Special edition of The Singer’s Singer the Life and Music Of Matt Monro I uncovered a wealth of new material about the sessions, but questions still remained. However in November 2010 a disc appeared on eBay that helped fill in a lot of holes in the Jigsaw Puzzle.

Back in the Early 90’s Michele published a discography in the booklet that accompanied a box set of her father’s recordings. Top of the list was a disc called Strange Lady In Town. The details had come from the widow of Harry Leader, whose orchestra accompanied Matt on the recording, and who, a few years before had issued the track on a cassette called The Harry Leader Story. This originated from a copy of the recording on acetate in the Leader archives. The disc had very few details on the label, only that it was recorded for a label called Solitaire, which was believed to be American. At the time Matt was using the stage name Al Jordan.

As the recording was made before Matt began to keep a record of professional appointments in his diary, the trail ended.

Wind forward then to 2007 when I started researching this subject for the book.

The first thing was to reach out to record collectors worldwide to try and find out more about Solitaire records. The problem was that there have been several labels called Solitaire in the past and none of the ones I tracked down were the company I was looking for. The breakthrough came when someone posted my request for information on the Whirligig Forum. A collector called Brian contacted me and said he had come across some clippings from a old copy of New Musical Express (NME) from August 1955 which spoke of a Harry Leader recording for a label called Top Hits Of The Month.

The first clipping was an advertisement for the label – 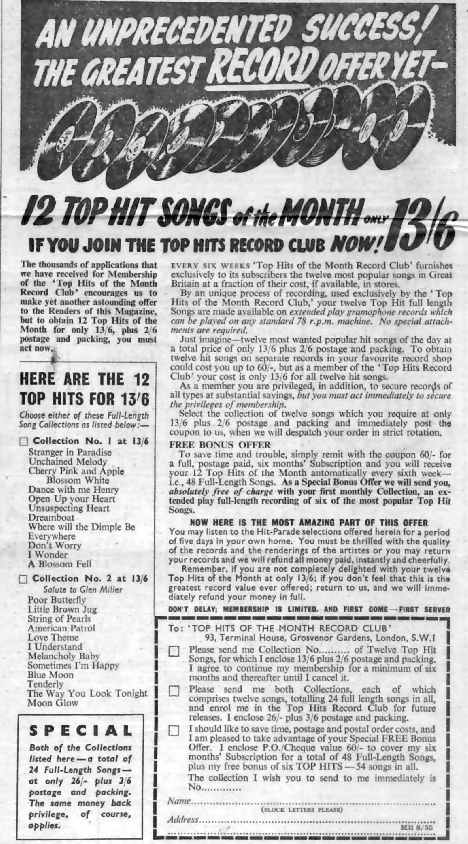 …but more importantly the second cutting gave the first ever definite details of the Harry Leader/Al Jordan recording.

Further to the startling revelations in the NME last week concerning cut-price discs launched by “Top Hits Of The Month Record Club” in Britain, it can now be disclosed that Harry Leader and his Orchestra have been signed to record a selection of current hit tunes.

At the IBC London studios on Wednesday of this week, the Leader Orchestra was augmented by several well-known instrumentalists, including Show Band trombonists Lad Busby and Jackie Armstrong, also Stan Roderick (trumpet).

Stand Roderick recorded a trumpet solo of “John and Julie” – the theme music from the British film of the same name.

The sessions were supervised by Manuel Kopelman, the American recording executive who is concerned with this new venture. He told the NME that all recordings despatched for mail order will be under the “Top Hits Of The Month” label; records sold in Stores will be on the Cameo label; whilst all non-classical LP’s will appear on the Manhattan label.

The date of the magazine indicated that the session took place on Wednesday 10th August 1955 at IBC Studios in London. Rather than the Solitaire label, it appeared that the song received a release on ‘Top Hits Of The Month Record Club’. A little more digging led to the discovery of a listing for a disc with Strange Lady in Town and a song mentioned in the above article “John & Julie” with the Catalogue Number EMO 9. The disc was almost impossible to find and irritatingly, a copy was sold just a few months previously by an online store – whose listing was still tantalisingly on their site – and sold for just three British pounds. But did Matt Monro appear on the disc? It took until just a few weeks ago to get that question answered.

I’d had an automatic search set up on eBay for several years, which sent me any listing that contained the track ‘Strange Lady In Town’. As you’d expect I received daily emails for the more familiar Frankie Laine version, but all of a sudden, after a wait of nearly three years, a disc called ‘Hillbilly Favourites’ on the Top Hits Of The Month Record Club label appeared – Catalogue number EMO9! No artist was listed, but this was often the case or alternatively it would just call them ‘The Top Hits Orchestra and Vocalists’

I didn’t hesitate I put a bid on it and phoned Michele straight away.

It was a ten-day listing, so as you can imagine it was a very long wait and our patience was put to the test. With hours to go another bid was submitted which made the auction unbearable and Michele was apoplectic, upping our original bid by several tens of pounds. She was determined not to lose this listing even though it might not been her father. It was a chance she didn’t want to take, as the reality was we might never see another copy again. Thankfully we won the auction and a week later the disc arrived undamaged (always a worry when being sent a shellac disc via the Post Office smashing department). 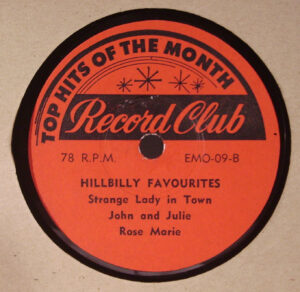 As soon as it arrived I rushed to the studio and put the disc on. All I had to hear was the first two notes and I knew it was Matt’s recording. I phoned Michele and said ‘Listen to this’. I played it down the phone and her reaction was such that her son Max asked her if everything was OK! So finally the estate has an original copy of Matt’s first professional recording and know exactly where it was first released.

But what of the ‘Solitaire’ connection? None of the articles mentioned the brand name but this was also one of Kopelman’s labels – probably made exclusively for a particular store.

It also appears that Manuel Kopelman issued recordings in the USA. According to this Billboard article this is where his business began.

This makes it clear that the masters for most of the Top Hits releases were recorded in America, so perhaps the UK recorded masters also made it to release in the States. On the other hand it’s also possible that it was never issued in the USA at all and the confusion comes from the fact that the label had American owners. The big question is – could the recording have appeared anywhere else on another label?

Top Hits Of The Month Record Club releases were also issued in Canada so it’s highly likely that the record came out there as well. Besides Top Hits and Solitaire, Kopelman also marketed his records under the labels Manhattan and Cameo and released 10” vinyl albums called “Popular Hit Parade” or “8 Top Hits”. One of these (“8 Top Hits” Solitaire 1245) reportedly featured Matt singing a song called Domani but I have been able to track down a copy of this disc and can categorically say that it is not Matt. Interestingly the back cover of the album features ‘Al Jordan’ as one of the artists that appear on Solitaire’s releases, but there is no evidence to suggest that he ever recorded anything else for the label.

So was this recording released on Solitaire after all? That mystery still remains. As yet no copies have turned up, so nobody can say for certain. But if you ever come across a 10” LP on the Manhattan or Solitaire labels originating from the UK or Canada called Popular Hit Parade, 8 Top Hits or something similar that features ‘Strange Lady in Town’ do let us know.

The company that ran all of these labels was called Recordiscs (London) Ltd. It was dissolved in 1969 and had been inactive for a considerable number of years. Nothing appears to remain of its archives and so the master tape for Matt’s first professional recording is probably gone forever – This makes the known surviving copies all the more precious. 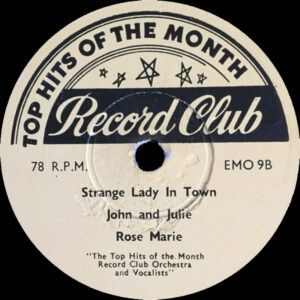 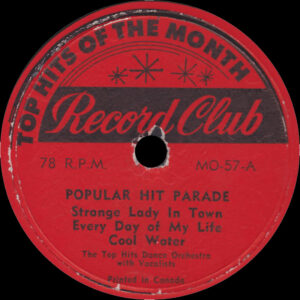 In the ten years since this article was first published a few more details ahve been found.

In addition to the Issue of Strange Lady In Town on Hillbilly Favourites, Top Hits of the Month also released the same disc with the exact same contents and catalogue number (EMO 9) on an untitled disc in their Popular Hit Parade series.  The song was also issued in Canada on a similar compilation. The catalogue number on that disc is MO-57. However, this disc contains an alternate version of the recording.