On this page, you’ll find a selection of different ways to find out about Matt’s life and career as well as a brief biography first published on the original Matt Monro website.

The Boy From Shoreditch - Audio Documentary

Made to celebrate what would have been Matt’s 90th Birthday in December 2020, featuring rare interviews and audio clips plus tributes from famous fans.

The Singer's Singer - The Life and Music of Matt Monro 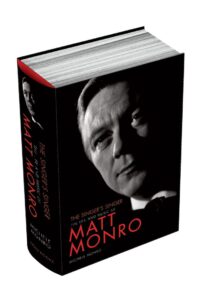 Matt Monro: The Singer’s Singer is the never-before-told biography of one of the Britain’s most popular and endearing singers, whose songs – from Born Free to Walk Away to Portrait of My Love –have been ingrained in the public consciousness, and whose talents were revered by friends and contemporaries including Frank Sinatra, Sammy Davis Jr., Bing Crosby and Sir George Martin.

“If I had to choose three of the finest male vocalist in the singing business, Matt would be one of them.” – Frank Sinatra

Now, in truthful detail, Matt Monro’s daughter Michele traces the life of her father: from an impoverished East End childhood as Terry Parsons to a job as a London bus driver to his eventual superstardom as singer Matt Monro.

Here the man behind the image, the man who rubbed shoulders with some of the most famous names in the business; a man who recorded the very first James Bond song, represented his country in the Eurovision Song Contest and Royal Command, and made a string of global hits that are still sung and loved around the world. Revealing the high and lows that shaped his life and career, this candid biography also delves into Monro’s long battle with alcoholism, and his struggle to come to terms with his past.

“Matt Monro was the finest singer of ballads that I have ever had the good fortune to produce.” – Sir George Martin

“Apart from being a wonderful singer and marvellous entrepreneur of lyrics, he was also the ultimate professional” – Dame Shirley Bassey

Drawing on more than two hundred interviews with friends, family and fans who knew Monro both in and out of the spotlight, and replete with personal anecdotes, rare photographs and stills, including personal letters written by the star on the road, this piercing portrait covers Monro’s considerable achievements in a lifetime dedicated to music, and exposes the man whose peers nicknamed him ‘The Singer’s Singer’.

“Matt was a great talent and lovely man, and while they keep playing his songs how can we possibly forget him. The Matt Monro magic goes on and on.” – Sir Roger Moore

A singer once said “his pitch was right on the nose: his word enunciations letter perfect: his understanding of a song thorough. He will be missed very much not only by myself, but by his fans all over the world”. The singer was the legendary Frank Sinatra. The man he spoke about: the irreplaceable Matt Monro

High praise indeed then for a boy whose early years knew him under such auspicious names as Terry Fitzgerald, Al Jordan, Fred Flange and his true birth name Terence Edward Parsons.

Born on 1st December 1930 in Shoreditch, London, he was the youngest in a family of five. He left school at the age of fourteen and landed his first job as “offal boy” with the Imperial Tobacco Company. Thus followed a string of such jobs. At the tender age of seventeen and a half, he volunteered for the army for twelve years. After two years he volunteered for overseas duty and was posted to Hong Kong.

He entered a series of popular talent shows and won seven times. The winner got a half-hour programme on Redifusion, which was Hong Kong’s local commercial radio station. He was considered good enough to be booked as a resident guest on the radio station and eventually Redifusion gave him his own programme, “Terry Parson’s Sings”.

After being demobilised in 1953, Terence returned to Britain. To make ends meet he joined London Transport as a bus driver.

He became friendly with a couple of musicians and talked them into going to a studio with him. This was the first disc Terry Parsons recorded. It was made in a Glasgow sound studio and entitled “Polka Dots and Moonbeams”.

While working on a Number 27 bus during the day – he sought to establish himself as a band singer at night. He sang first as Terry Fitzgerald and then as Al Jordan. His biggest break over that period was with the popular Harry Leader Band. Meanwhile copies of his Glasgow disc were sent throughout the music business and came to the attention of Winifred Atwell. She was so impressed that she arranged an introduction to Decca Records and an audition followed. They took the practically unheard of step of launching a new singer with an LP and a recording contract. It was called “Blue and Sentimental”. Decca decided he needed a new name. Matt Monro was born.

Following on from the contract with Decca, there followed a series of Radio Luxembourg broadcasts with Winifred Atwell and Cyril Stapleton signed Matt for the Show Band Show series.

He was asked to record a T.V jingle for a soap firm. This was just the start of what were to feature heavily in Matt’s life. During a twelve year span Matt recorded over 40 commercials for notable companies.

It was a demonstration disc that eventually turned the tide. Record producer George Martin wanted Matt to record a take-off of Sinatra for one of the tracks on the second Peter Sellers album he was working on. Sellers, himself a master of impersonation admitted that he could never approach Sinatra’s style so accurately and suggested they use Matt’s version. It became the opening track for the new album “Songs for Swingin Sellers”. Matt’s version of the track “You Keep Me Swingin”, was used on the LP under the name Fred Flange. A lot of interest was stirred up over the mysterious singer and eventually the secret leaked out. Matt was in demand. He was booked for cabaret all over England which led to television and radio dates plus a trip to the U.S.A.

Everyone associated with the recording was impressed, especially George Martin, who asked if Matt would record under his own name. He gave Matt a Parlophone contract and became his recording manager. Matt’s first disc was the little known “Love Walked In” coupled with “I’ll Know Her”, but the whole picture changed when he made his second recording, the unforgettable “Portrait of My Love”, it reached number three in the charts and stayed there for months

Next followed “My Kind of Girl”, a hit on both sides of the Atlantic, followed by Matt’s first Parlophone LP “Love is the Same Anywhere”. In June 1961, Redifusion gave Matt his own television series.

The hit records continued “Gonna Build a Mountain”, “Softly As I Leave You”, “When Love Comes Along”, “My Love and Devotion”. All helped to cement the ever-growing popularity of someone who was being hailed as “Britain’s No 1 male singer”.

Another British phenomenon of the early 60’s was the James Bond movie and Matt’s voice was to feature on the soundtrack of “From Russia With Love”, the second Bond film.

Matt was elected by the B.B.C. for the Eurovision Song Contest, with the entry “I Love The Little Things” vying against the Austrian entry “Warum Nur Warum”. Matt’s song came second and “Warum Nur Warum” was unplaced. Matt thought the Austrian entry very powerful and wanted an English lyric for it. “Walk Away” was born quickly followed by the highly successful “Born Free”.

Matt’s popularity became assured not only in Britain, but also in United States of America. “My Kind Of Girl” had just entered the US charts. Matt became a constant traveller appearing in cabaret and concerts worldwide.

Matt enjoyed his tenure in the U.S. Special highlights included appearances in some of the biggest stateside cities in America. The Roundtable and Persian Room in New York. The Roosevelt Hotel in New Orleans, the Fairmont Hotel and the Louise Davies Symphony Hall in San Francisco. Harold’s in Reno, Harvey’s in Lake Tahoe, Century Plaza Hotel and The Shrine Auditorium in Los Angeles. Ilakai Hotel in Honolulu, The Resorts International Hotel in Atlantic City. Gigs in Las Vegas at the Freemont Hotel, the Tropicana, the Sands and on one of these occasions, accompanied by the Woody Herman Band and an unforgettable time when he worked with Jack Benny at the Sahara.

His world-wide audience was simply phenomenal and he had an enormous following in South America and delighted his fans with whole albums in Spanish. It was an album in this foreign tongue that actually produced his first Platinum disc.

Matt’s rise to fame coincided with the Beatles era and although their styles were very different he had great success with several Lennon/McCartney songs. Matt became the first artist to cover “Yesterday”, and took the song to No. 8.

There came numerous cabaret appearances in Britain including a record-breaking 10 sell out seasons at London’s Talk of the Town.

He was constantly victorious in popularity polls as Britain’s No. 1 Male Vocalist, but his biggest highs came from working with such illustrious names as Quincy Jones, Nelson Riddle, Billy May, Ted Heath, Mantovani, Michel LeGrand, Robert Farnon, Henry Mancini and the London Philamonic Orchestra.

Matt’s last hit single came in 1973, when “And You Smiled” made the Top 30. Although Matt was a stranger to the charts in later years, the “Heartbreakers” compilation in 1980 proved that the Monro magic still worked. The album went gold within a few days.

One of his last performances was at the Barbican, London, a sell out night and one that was highly praised by critics and public alike. With a standing ovation of over seven minutes, Matt was overcome with emotion.

In 1984 Matt became ill and died shortly after at the age of 54. It was a tragic loss to the music business. Thankfully he has left us with a wealth of beautiful recordings.